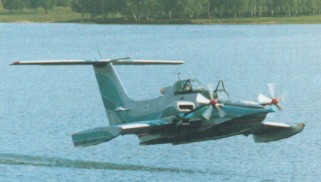 The airframe is made of aluminum-magnesium alloy, AMgo. The air-frame is riveted.
The full-scale tests revealed that the ekranoplan craft "Strizh" demon­strated natural (without employment of automation) ground-effect stabili­ty. Its seakeeping characteristics proved to be higher than that of flying boats of the same weight. In addition, the tests proved the "Strizh"'s capa­bility to make maneuvering in vertical planes out of ground effect and to make a short flight out of ground effect to overcome obstacles.