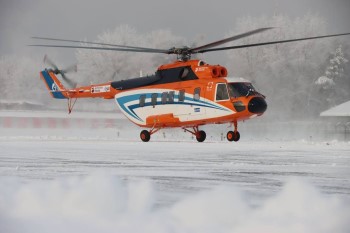 The Mi-171A3 offshore helicopter is a deep modernization of the Mi-171A2 multipurpose helicopter. The helicopter is designed in accordance with the IOGP (International Association of Oil and Gas Producers) standard.

The helicopter is capable of transporting 16-19 passengers over water surfaces and a maximum number of up to 24 passengers (flight over ground).

The power plant consists of two VK-2500PS-03 turboshaft engines (an upgraded version of the VK-2500T engine with better characteristics) with a capacity of 2,000 hp each, emergency mode (2.5 min power) not less than 2.700 hp, the turboshaft engine is equipped with an full authority digital engine control system (FADEC type BARK-6V-7C). The offshore helicopter can operate in the ambient temperature range from -50°C to + 50°C and provide engine starting at an altitude of up to 6,000 m. The carrier system is five-bladed with a four-bladed X-shaped tail rotor using composite materials in the structure.

The main differences of the helicopter:

-the central part of the fuselage (power plant, main gear box-rotor drive system-tail boom / tail rotor pylon is identical to the design of the Mi-8AMT)
-cockpit, lower part (floor, fuel tanks-containers) of a similar design of the Mi-38 helicopter
-landing gear (wheels) of the Mi-24 helicopter
-the helicopter can be operated day and night (all-weather) in the ambient temperature range from -50oC to + 50oC
-the helicopter cockpit is designed according to the “glass cockpit” principle and has 6 multifunctional color indicators
-provides automatic and manual control of the helicopter, from takeoff to landing
-has an autopilot system
-the helicopter is equipped with an emergency splashdown system with automatic activation (six ballonets) and two life raft
-with at rude water landing, the fuselage (energy-absorbing) can withstand an overload of up to 20g
-has a thermal imaging system (FLIR)
-weather radar
-rescue winch
-lack of a unload ramp at the aft part of the fuselage

* - According to unconfirmed information