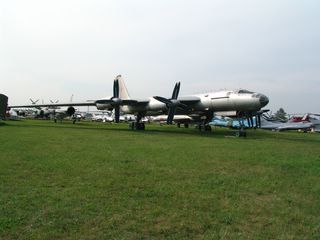 In the early 50s, the Tupolev Design Bureau was working on the creation of a strategic bomber.

In September 1952, the strategic bomber made its first flight.

The Tu-95 is an eight-seat (or nine-seat), monoplane, high-wing, swept-wing wing with four engines located in the wing and swept tail unit and with a retractable, tricycle landing gear with a tail safety support.

In September 1957, it was put into service and became part of Long-Range Aviation (DA). In total, more than 500 units of all modifications were produced.

Tu-95s were remained in service until 1990, after which they were completely withdrawn from service.