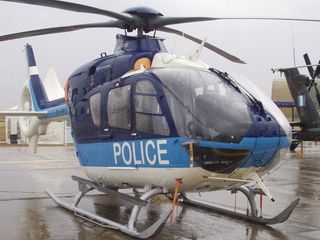 Photos from the personal collection of Konstantinos Panitsidis & Marcos Andreou

In the early 90s, Eurocopter offered a new version of the EC135 helicopter, which was developed on the basis of the ΒΟ-108 helicopter. The helicopter is equipped with two Turbomeca Arrius 2B (1) Turboshaft engines with a power of 470 hp each. A new four-blade hingeless main rotor was installed on the helicopter in combination with a fenestron-type tail rotor.

The first flight of the prototype took place on February 15, 1994. Serial production of the EC-135 helicopter since 1996.