This is the fiveth of the seven, in total, “Roussen” type ships. It was constructed in the Elefsis yards, based on a proposal from the english Design Office “Vosper Thornycroft Ltd”.
The Missile boat RITSOS launched on 09 October 2006, and was incorporated in the power of the Navy on October 19, 2015.

The ship's name was given in honor of Second Mate N. Ritsos who was killed on November 16, 1912 participant as company commander of marines contingent of invasion to liberate South Chiou. 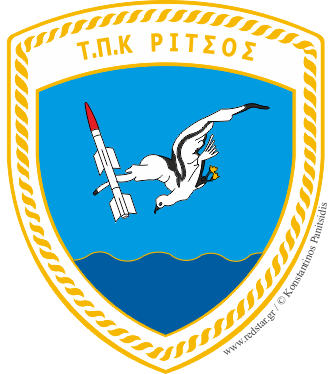 ESCUTCHEON
The escutcheon of the Missile boat RITSOS, illustrates a guided missile and a seagull which flies near the surface of the sea. The scene underlines the speed and firepower of this type of warships.

The GMD “RITSOS”, is a modern vessel designed for undertaking Naval Operations near the coast, with excellent capabilities for confronting aircrafts, surface ships and guided missiles.

Its main features are the quick reaction to threats, the vast firepower, the high speed operations, the increased capabilities of dealing with damages in battle and undertaking missions in environments of Radio-bio-chemical and electronic warfare.