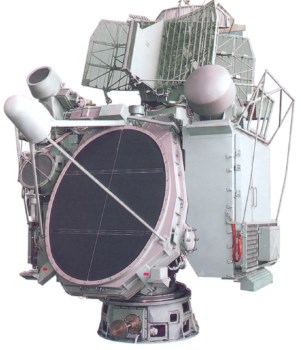 The complex is intended to repel massed attacks of low-flying anti-ship missiles, other air attack weapons, manned and unmanned, as well as of ships and ground- effect craft.

The complex is capable of detecting, without any assistance, air and waterborne targets and hitting up to four targets at a time with telecontrolled missiles.

Can rely on the information from the all-ship target designation systems and control the 30-mm gun-mounts fire to protect the close range of the engagement envelope from 200 m and on. The complex features short response time and high firing rate. The combat operations are automated.

Installed on board the ships of various classes of more than 800 tons displacement.

The control system of the KLINOK air defence missile complex is intended for any tracked target engagement with missiles and gun fire simultaneously and performs tasks given in the software package (KSPO). The control system comprises the detection module which performs the following tasks:

- air targets detection, low-flying and surface targets included;
- simultaneous tracking of up to eight targets;
- air situation analysis with classification of targets as to the degree of their danger;
- generation of target designation data and transmission of data in range, bearing and elevation;
-target designation data transmission to the ship's air defence facilities