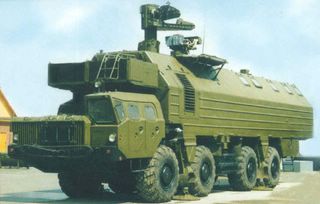 Self-propelled guns can deliver fire by remote commands from the central post, or in the self-contained mode using their organic optical/mechanical sight, ballistic computer and laser range-finder. The guns are loaded semi-automatically with complete rounds. The guns can fire rounds with HE projectiles with a base fuse, and anti-aircraft projectiles with a nose fuse, as well as drill and dummy rounds.

Combat support vehicles provide power supply of the central post and self-propelled guns, as well as room for crew's rest, messing and medical care. Electric power is supplied by two diesel generators. Fuel tank capacity is sufficient for the system to operate in the self-contained mode for seven days. All Bereg-E elements are mounted on the single-type platform: MAZ-543M wheeled all-terrain truck.