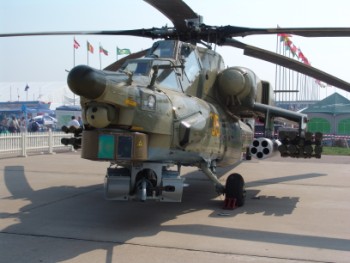 Twin-engine, two-seat army combat helicopter Mi-28 designed by OKB nam. M.L. Mil, designed and built according to the classic single-rotor scheme with a five-bladed main rotor and a four-bladed tail rotor, an X-shaped scheme (tail rotor blades are installed at an angle of 45o and 135o to reduce noise levels) and an auxiliary wing.

The helicopter can be used: for round-the-clock combat missions in simple and limited weather conditions, destruction of military equipment, including armored targets, enemy manpower, as well as air targets.

The crew cabin is fully armored using lightweight titanium armor with ceramic exterior tiles and anti-reflective armor glazing, protecting the crew from bullets up to 12.7 mm in caliber.

The Mi-28 is equipped with two TV3-117VM turboshaft engines, 1950 hp. Each. The air intakes of the gas turbine engine are equipped with dust protection devices. To reduce infrared radiation, the engines are equipped with triple-lobe infra-red suppression exhaust nozzle (designed to protect the helicopter from missiles with thermal homing heads). Autonomous start of the engine is provided by the AI-9V APU, which also provides the drive of the systems during ground checks and the supply of warm air to heat the cabins. Helicopter landing gear tricycle with tailwheel, non-retractable.

The helicopter has a high-precision optoelectronic system with high resolution and a level of automation on a gyro-stabilized platform with +110o -110o mobility in azimuth and +13o -40o in elevation for ATGM guidance and cannon firing.

Armament: consists of a non-removable mobile unit NPPU-280-1 with a modified tank gun 2A42 caliber 30mm with a high muzzle velocity with an ammunition of 250-300 rounds. Under the wing, it is possible to hang up to 16 Shturm or Ataka-V ATGMs and two rocket launcher units with a caliber of 57mm, 80mm and 130mm. 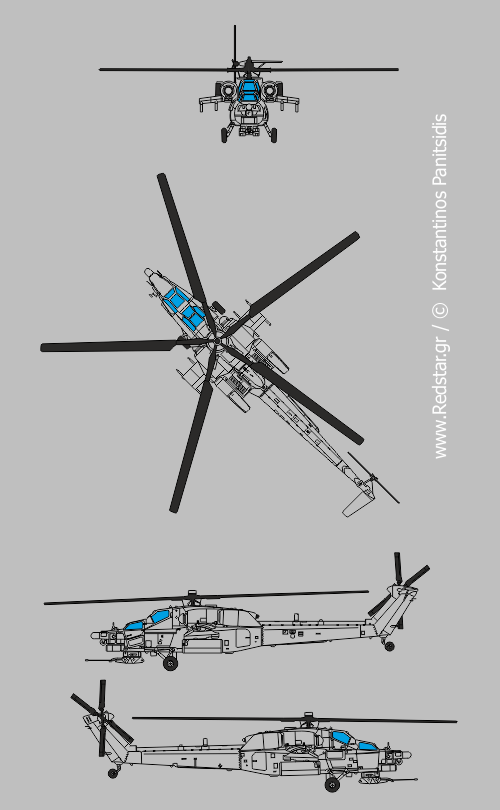