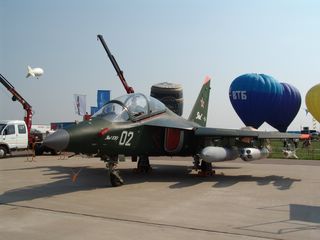 THE PROS WHY CHOOSE Yak-130

Yak-130 is the best cost-effective dual-role solution to meet a wide range of pilot training and combat employment requirements.

Yak-130 is the only new-generation combat trainer with flight characteristics similar to those of the 4th/4th+ generation fighters in the subsonic speed envelope.

Yak-130 is a core element of the integrated training system for frontline aviation crews, covering 80% of training syllabus.

Yak-130 ensures enhanced flight safety due to high reliability and redundancy of its vital onboard systems, and introduction of an active flight safety
system.

The Yakovlev Design Bureau started developing Yak-130 in 1991 as the competitor in the Russian Air Force's tender for a new trainer aircraft. Since 1993 till 1999 the development programme had been continued in cooperation with the Italian company Aermacchi within the framework of the Yak/AEM-130 joint international programme aimed at "westernisation" of the aircraft. The Yakovlev Design Bureau came later to upgrade, all by itself, the Yak-130 design to a combat trainer configuration to meet revised tactical and technical requirements of the Russian Air Force for both basic and advanced trainer and light combat aircraft.

In the early 1990s primary and basic training of Russian military jet pilots was accomplished on the L-29 and L-39 jet trainers. However, these aircraft could not help to form air student's flying skills adequate for the transition to the 4th generation fighters because of the great gap in flight performance with the latter. Whereas employing two-seat versions of combat aircraft for advanced training was inefficient due to high flight and maintenance costs.

Taking into account these concerns the Yakovlev Design Bureau proposed a concept of a fully integrated training system (ITS) with modern jet trainer at its core. The ITS should cover all scholarship phases, ranging from air student selection and academic studies, to primary, basic and advanced flight training, combat employment and type conversion training, to provide training of highly skilled pilots in shorter time and at lower cost.

Yak-130 is also a very cost-effective trainer as its flight hour costs 4-6 times less than that of a 4th generation fighter.
The ITS unified information-software system and training management and control system provide data format compatibility in both ground-based and airborne parts of the system, automated syllabi generation and scheduling, training flight planning and debriefing, individual student progress tracking, etc.

The Yak-130 two-seat combat trainer aircraft is designed to provide high-quality basic, advanced, tactical and type conversion pilot training for all current and prospective front-line combat aircraft, as well as engage ground and aerial targets by day and night in fair and adverse weather conditions.

Besides flying schools, Yak-130 can be used in air combat centres for tactical training; in operational conversion units for type conversion training of fighter pilots; and in active military aviation units for keeping up flying and weapons delivery skills, and preserving service life of active-duty combat aircraft.

The baseline Yak-130 can be also efficiently employed in  combat actions as light attack aircraft to defeat surface and aerial targets in low-intensity conflicts.

Yak-130 operational advantages
simple, robust and durable airframe design
non-consuming pneumatic system needs no refilling
onboard oxygen generating system and chemical oxygen generators in
ejection seats operate autonomously with no need for refilling
onboard auxiliary power unit supplies power on the ground to ensure:
- operation of aircraft power supply system and onboard equipment without starting main engines;
- ground testing of the onboard equipment without external power supply;
- air conditioning of the cockpit and cooling of the avionic equipment
compartments (no external air conditioner is required);

Yak-130 is an all-metal monoplane with swept mid-wing, all-moving stabilizer, fin with rudder, and three-leg landing gear. Well-developed leading edge extensions of the wing and subsonic air intakes provide stable and controllable flight at high angles of attack (up to 40 degrees).

Airframe is made of high-strength AI-Mg-Li alloys featuring no composite power elements to meet the requirement for simple and low-cost maintenance and repairs, essential for very humid-and-hot operational conditions. Some load-carrying elements of the wing and empennage are made of titanium. A number of maintenance hatches and quick-release panels on the airframe skin allow easy access to units and equipment inside the fuselage.

Crew cockpit houses the crew (student, instructor) in two tandem cabins shielded with one canopy. The canopy includes a fixed all-glass windshield and a common hinged portion uplifted to the right. The overhead glass is divided in two parts by the middle arc and internal partition. Behind the cabins, in the upper centre fuselage, an airbrake flap is installed.

A three-leg lever-type landing gear is retracted in flight. Its design allows operations from paved and unpaved airfields with soil densities exceeding 7 kg/sq.cm. Each main landing gear leg has one wheel with the hydraulic disk brake, and the nose leg has a non-braking wheel. There are two landing lamps mounted on the right and left-side doors of the main landing gear, a mudguard on the nose landing gear, and a taxiing lamp on its strut. Both the landing gear and its doors are operated (lowered and retracted) in normal conditions by the primary hydraulic system, and in emergency by the emergency pneumatic system.

Each cabin is equipped with thrust control levers, and engines status and parameters display.

Air intakes installed under the wing extensions ensure smooth engine operation at all operational angles of attack. They are equipped with doors to protect engines from foreign object damage on the ground. Extra air valves in the upper part of the intakes serve also as anti-surge doors.

APU installed in the rear fuselage provides independent engine starting (at up to 8,000 m altitude), air supply to the air conditioning system on the ground, and standby electric power for onboard AC users on the ground and in the air.

Yak-130 is also equipped with fire-warning and fire-fighting systems designed to detect and extinguish fire in the main engines and APU
compartments.

Fuel system of a closed type continuously supplies fuel under pressure to the main engines and APU on the ground and in all flight conditions including negative g-ioad and inverted flights. It includes two fuselage and two wing fue! tanks with the total capacity of 1,700 kg, single-point pressure refuelling system, tank drainage system and fuel metering system. Two external fuel tanks can be suspended under the wing. The pressure refuelling system ensures automatic filling of all tanks including two external ones. Gravity refuelling is also possible. At customer's request the aircraft can be fitted with the in-flight refuelling system.

The quadruple analogue-digital fly-by-wire system (FBW) provides a carefree handling of the aircraft by means of the wing control surfaces, stabilizer and rudder. The FBW system maintains flight characteristics within the operational envelope for a given stores configuration, and automatically limits maximum angles of attack, normal · g-loads and rudder deflection angles in function of ram air pressure. It allows re-programming stability and controllability characteristics to simulate flight performance of a given combat aircraft. The FBW system includes air data measurement and distribution system (altitude, airspeed, sideslip angle, angle of attack, air temperature, etc.).

Electrical system is designed to supply the aircraft systems and onboard equipment with AC and DC in flight provided by the onboard electric generators, converters and batteries, and on the ground from airfield electric power units.

"Zero-zero" type ejection seats allow crew to leave the aircraft in emergency through the canopy glass at airspeeds ranging from 0 to 1,050 km/h and all altitude range of aircraft. The canopy glass is fragmented by pyrotechnic cords of the glass breakup system after ejection has been initiated.

Oxygen system comprises the onboard oxygen generating system (OBOGS) designed to supply oxygen to the crew members in all flight modes at altitudes of up to 12,500 m, including emergency situations such as cockpit depressurization and crew ejection. Emergency oxygen system installed in the ejection seats is a source of oxygen for about 5 minutes in cases of the OBOGS failure and cockpit depressurization (automatically activated if over 8,000 m), ejection and subsequent parachute descent.

Air conditioning system is designed to ventilate and maintain the required air temperature and pressure in the cockpit, cool down electronic equipment compartments, pressurize external fuel tanks, supply air to the OBOGS, etc.

The Yak-130 cockpit comprises two fully-integrated tandem cabins similar in layout and instrumentation to those of advanced 4th/4th+ generation fighters. They provide real-fighter cockpit environment with excellent visibility for both student and instructor pilots on the ground and in the air.

Both cabins are equipped with central aircraft control sticks and side engine control levers designed according to the HOTAS concept to provide for continuous flight management, improved performance and reduced stress of the crew.

All data on the aircraft systems, equipment performance and combat employment are presented on a headup display in the front cabin, and three 6x8-in multifunction liquid crystal full-colour displays for each pilot in both the front and rear cabins.

Multifunction displays (MFD) are primary head-down reference instruments with push-button controls ("soft keys"). Left-hand MFD presents flight and navigation data for missions flown in complex conditions: in clouds, over sea, without horizon reference, at night, etc. Central MFD presents tactical situation, navigational and cartographic data. Right-hand MFD presents equipment status data from the onboard automated testing system, recommendations for emergency procedures as well as images from electro-optical seekers of guided munitions. All MFDs are interchangeable: when any one of them fails, flight and navigation data required for safe piloting is presented on a sound one.

Initial flight data (coordinates of airfields, radio beacons and waypoints) and communication channels data are entered into the memory of the main computer with the data input system. Non-volatile memory is used for data transfer to facilitate their recording, storage, uploading, and downloading for post-flight analysis and de-briefing.

Yak-130 combat trainer can deliver various types of guided and unguided munitions. It can carry up to 3,000-kg payload on nine hardpoints: six underwing, two wingtip and one underfuselage. The outward pylons and wingtip stations are used for suspension of guided missiles weighing up to 250 kg. The inward and middle pylons can accomodate up to 525-kg payload. Two inward pylons are "wet" and can carry external fuel tanks.

Stores options include guns, bombs, missiles and rockets, target designation and electronic countermeasures pods, such as: 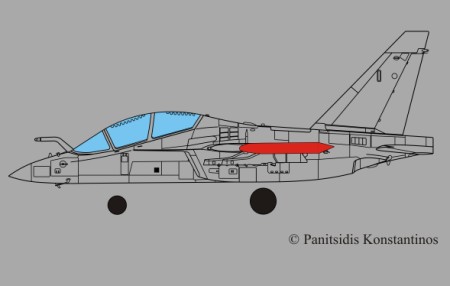 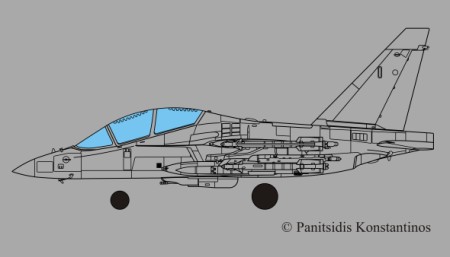 Basic targeting data is fed to the HUD. Weapon delivery commands are administered with knobs on the control sticks and throttles. Stores status is shown on MFDs.

Yak-130 can be employed in low-intensity conflicts in the role of light attack aircraft armed with a range of air-to-ground and air-to-air guided and unguided munitions. 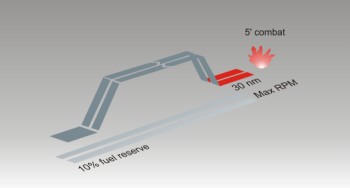 Besides advanced flight performance Yak-130 light attack aircraft has a number of tactical advantages, such as:
- increased survivability thanks to small visual signature and employment of infrared and electronic countermeasures;
- high precision navigation and weapons delivery;
- capability to operate from unprepared and soil airfields;
- high tactical autonomy and basing flexibility;
- rugged design and simple maintenance 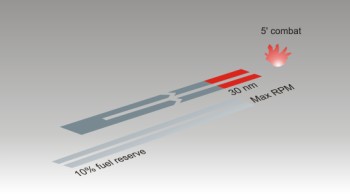 The baseline Yak-130 has sufficient modernisation and growth potential thanks to excellent aerodynamics, excess energy and volume reserves, easily expandable equipment and weapon suites. Its combat capabilities can be augmented by accommodating more sophisticated systems, equipment and munitions, such as:

Owing to high-level unification, the light attack aircraft can have up to 90% commonality with the baseline Yak-130.

Yak-130 is an easy-to-handie aircraft with good stall recovery and spin resistance characteristics. Its flight performance is similar to that of modern 4th/4th+ generation combat aircraft in the subsonic envelope, including takeoff and landing, low-speed flying, climbs, turns and vertical manoeuvres. 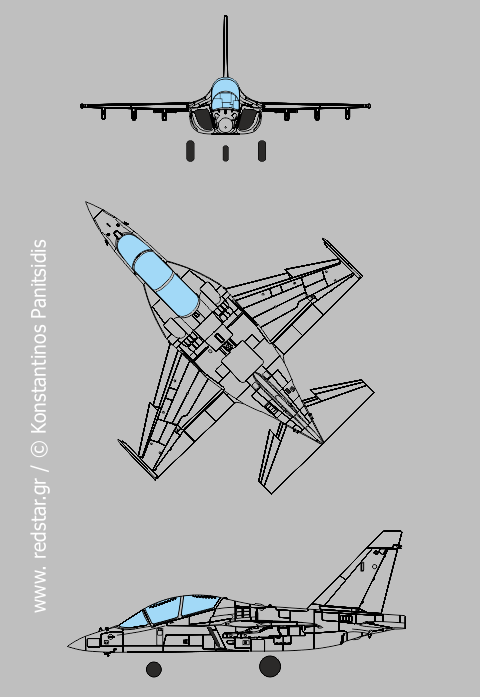