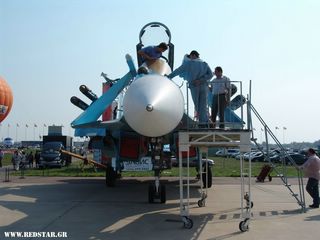 The aircraft is a carrier-borne single-seat supersonic fighter powered by two AL-31F Series 3 turbofans each producing 12,800-kgf thrust. The Su-33 was derived from the Su-27 air superiority fighter.

The maiden flight of the Su-27K prototype was flown on 17 August, 1987. Since 1989, the aircraft has been in production at the Komsomolsk-on-Amur Aircraft Production Association (KnAAPO). 24 Su-33 fighters are operated by the Russian Navy's ship-borne fighter regiment deployed on the Admiral Kuznetsov aircraft carrier.