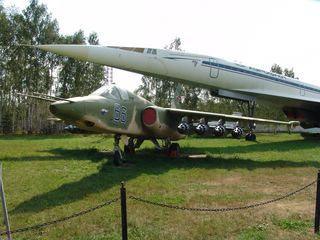 A single-seat subsonic armoured attack aircraft powered by two R-95Sh 4,100-kgf turbojet engines. The Su-25 prototype powered by R9-300 engines made its maiden flight on 22 February, 1975. Since 1979, the aircraft has been under series production at the Tbilisi aircraft plant.

In 1985, a twin-seat version production was started at the Ulan-Ude plant. Since the mid-nineties, that plant has been building single-seat variants too. By 2001, a total of over 1,300 Su-25s in all versions have been made. 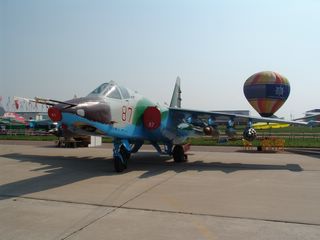 The Su-25 served as the basis for deriving the following variants:
the Su-25UB twin-seat combat trainer whose maiden flight was made on 10 August 1985;
Su-25UT (Su-28) twinseat trainer carrying no weapons (1987);
Su-25BM target hauler (1990);
Su-25T single-seat attack aircraft fitted with the Shkval sight and Vikhr ATGM system (its maiden flight was made on 17 August, 1984);

In 2001, an upgrade programme for Russian Air Force Su-25 and Su-25UB attack aircraft was launched. Modernised Su-25SM singleseat attack aircraft will be retrofitted with a novel sight/navigation suite comprising an advanced digital computer, a LCD-based cockpit management system, a satellite navigation receiver and an uprated radionavigation equipment. This will result in enhanced navigation and attack accuracy. 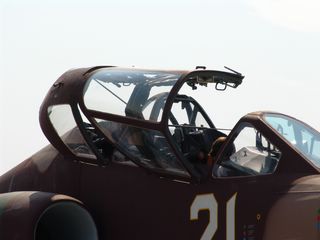 The Su-25UBM twinseat upgrade is going to receive in addition the Kopyo radar to step up its combat capabilities.