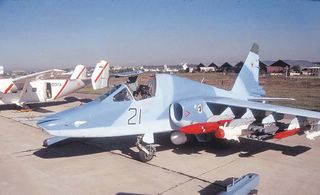 The Su-39 is a subsonic all-weather attack aircraft powered by two R-195 turbojet engines 4,500 kgf each. It is, essentially, a top-to-bottom upgrade of the Su-25 aircraft.

Then, the Tbilisi-based aircraft plant manufactured another seven aircraft that had been in official testing till 1993. Six of them were handed over to the Lipetsk Combat Training and Conversion Centre for operational evaluation (opeval).

A further derivative of the Su-25T was the upgraded Su-39 (Su-25TM) attack aircraft featuring the Shkval system, the Kopyo-25 pod-mounted radar and extra air-to-air guided missiles, such as the RVV-AE, R-27R and R-73.

The first prototype was manufactured in 1995 by the Ulan-Ude aircraft plant, with the second being built in 1997. Its production has been prepared for launch by the Ulan-Ude plant, the manufacturer of the Su-25UB, Su-25UBK and Su-25UTG twinseaters.