Photos from the personal collection of Christos Fotiadis

OKB Antonov, has successfully completed testing a new modernized version of the four-engined heavy transport aircraft An-124-100M-150, which was based on the An-124-100M.

- includes the main components of the ?N-124-100 program development:
- payload increased from 120 tons to 150 tons;
- take-off weight increased from 392 tons to 402 tons;
- flight range increased, including for cargo of 120 tons from 4650 km to 5400 km;
- aircraft assigned service life is increased to 24,000 flight hours; works on its extension up to 50 000 flight hours/10 000 flights/45 years service life are being performed;
- the new PO-500 schedule of maintenance has been introduced (maintenance every 500 flight hours);
- onboard crane equipment providing loading-unloading operations of a single piece of cargo up to 40 tons weight;
- fuselage structure had been strengthened to enable airlift of a single piece of cargo up to 150 tons weight;
- Navigation System and radar have been updated;
- digital anti-skid braking system allowing to reduce landing distance up to 30% have been installed;
- crew reduced from 6 to 4 members, and the comfort level of the crew rest cabin has been improved;
- military oxygen equipment has been exchanged for the civil one;
- reinforced wheels and tires have been installed;
- new devices for engine control have been installed;
- modernized systems of reverse control and engine vibration state monitoring have been developed;
- the SRPPZ-2000 ground proximity warning system installed;
- A826 inertial navigation system upgraded;
- Enhanced observation (EHS) has been applied;
- Mail Minimum Equipment List has been developed and is now being implemented 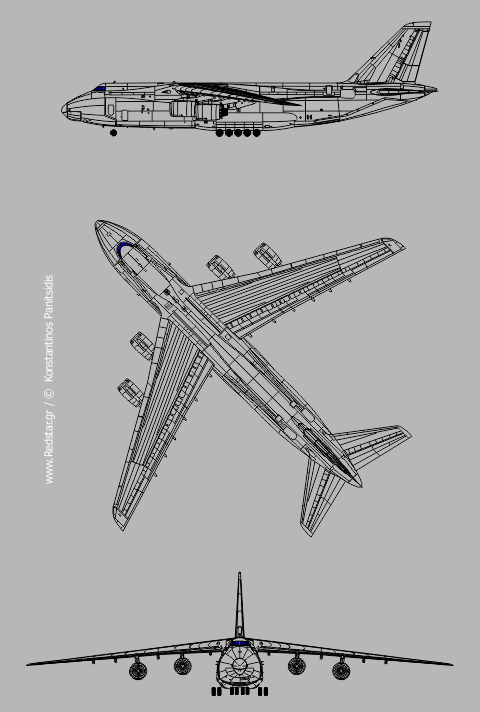