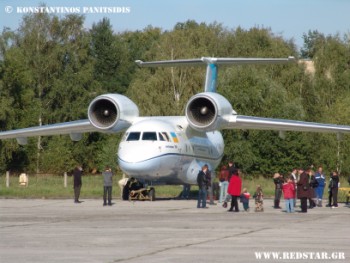 It is a STOL transport powered by two D-36 6,500-kgf turbofan  engines and featuring a lifting capacity of 7.5-10 tonnes. The prototype's maiden flight was made on 31 August, 1977. Under series production since 1985 at the Kharkov-based State Aircraft Production Plant (KhGAPP). Over 150 aircraft have been built. The An-74 designation was initially assigned to the polar version of the An-72 (built in 1983). Later, all civilian versions of that aircraft family were given that designation. The series production of the An-74 commenced at the KhGAPP in 1989 with the Polyot plant (Omsk) beginning its series production in 1993. The primary versions are the An-72 basic version of military transport with 10-tonne lifting capacity powered by two D-36 engines;

Τo day the two An-74 short take-off and landing universal transport aircraft are at the structure of the EMERCOM aviation fleet, based near Moscow in Zhukovsky. This air­craft was created on the base of tactical military transport An-72 aircraft. The An-74 is used for ministry operational groups, other structures experts, search and rescue groups, ground-based machines transportation, human aid and other logistical resources delivery (up to 7500 kg).

The studies of prospective short take-off and landing transport aircraft outlook began in Kiev in 1972, and they were initiated by the O.K. Antonov general designer. The initiative of the experimental design bureau was supported by the Air Forces interested in front-line military transport aircraft with load capacity about 5 tons to replace the An-24 and An-26 aircraft.

It was decided to install on the aircraft two D-36 turbofan high bypass ratio engines, firstly being designed at «Progress» for at last not «born» An-60 military transport aircraft, under leadership of V.A. Lotariov.

During the summer of 1977 the assembling of first experimental aircraft, named An-72, was completed. And in August, 31 of the same year, the new plane, piloted by test-pilot V.I. Tersky and flight engineer A.L Krutsoi, made its first flight. In 1978, the preparing of An-72 series production had been started at Kiev aircraft plant. But numerous An-32 export orders made to the plant comlicated the output of the new product. Under such conditions it was decided to transfer the An-72 series production to Kharkov.

The experimental design bureau had changed the aircraft design considerably. The new An-72 transport plane, able to replace Il-14, An-26 and An-12 at the North Siberia and the Far East regions, was required for the Ministry of Civil Aviation. The aircraft with a longer range (up to 3200 km) and more load capacity (up to 10 tons) than the original An-72 had, was required for civilian customers. As a result new version with more wing span and a new wing and with a stretched fuselage was made.

The first series An-72 aircraft manufactured at Kharkov aircraft plant made its first flight on December 22, 1985. In the Soviet Air Forces this type airplanes were mainly used at head­quarters units of military transport aviation.

The special civilian An-72A version with addi­tional navigator seat, view blisters mounted at the fuselage sides, some other structure of onboard avionics, was developed for the Arctic regions. The «Arctic» version series production was started in Kharkov in 1989, under designation An-74. Later all the An-72 aircraft intended for civilian use were designated as An-74. In total more than 160 An-72 and An-74 aircraft were manufactured before 1991. Now the small-series An-74 aircraft produc­tion is continuing at the Kharkov aircraft plant.

Other An-74 versions offered by ANTK are the An-74-200D «Salon» improved comfort level business aircraft carrying 10-16 passengers; the An-74T-200 cargo aircraft with a capacity of 10 tons commercial load and a crew of two, also the An-74T-100 for more difficult flight condi­tions with a crew up four; the An-74TK-100 cargo/passenger (an An-74TK-200 version with additional navigation avionics).
An idea came up to return to the engines mounted on the pylons under the wing scheme, traditional for transport aircraft, more preferable under aerodynamic and operational reasons. Such a version designated as the An-74TK-300, under experts estimation, should have the trans­port capabilities, which in 1,5-2 exceeds the previous versions and also should have consid­erably more economic efficiency.

An idea came up to return to the engines mounted on the pylons under the wing scheme, traditional for transport aircraft, more preferable under aerodynamic and operational reasons. Such a version designated as the An-74TK-300, under experts estimation, should have the trans­port capabilities, which in 1,5-2 exceeds the previous versions and also should have consid­erably more economic efficiency.

DESIGN FEATURES. The aircraft is made under normal aerodynamic scheme with high-wing and T-tail. Air proof fuselage has round cross-section. At the tail part the large-size manhole with cargo beam are provided. Air proof cargo cockpit is equipped for carrying 68 passengers, 57 paratroopers or 24 injured on stretchers, and also for equipment and cargo transportation. Onboard load and unloading mechanical equipment is provided. The landing gear - three support, high cross-ability. An-74 has four crew members.

POWER PLANT. Two turbojet bypass D-36 (2 x 6500 kgs) engines with thrust reverse system are mounted above the wing. The VSU to start up engine at air fields without required facilities is available. The aircraft fuel capacity is 13200 kg.

ONBOARD SYSTEMS AND AVIONICS.
An-74 is equipped with modern onboard radio electronic systems which allow to perform all-day and all-weather flights.